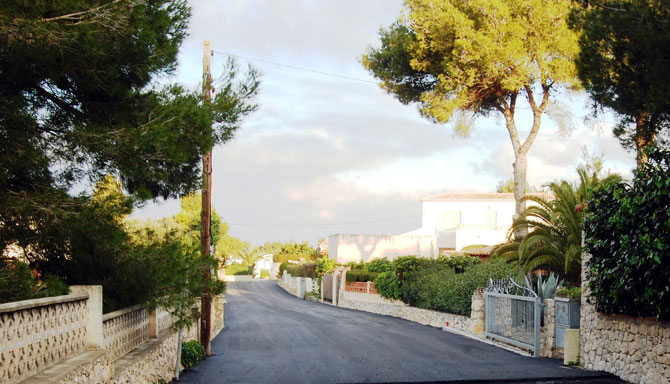 The streets are unknown publicly but the City Council announced that in early 2015 the second operation of the legislature asphalt covering of 15-20 kilometers, with a total of 1.14 million euros will take place.

This is the bid price, then companies can raise or lower depending on your criteria. According to municipal sources have said the project, which designed Singular study, collected the various complaints from neighbors about the state of public highways and distributed by zones as “Cap de la Nau, Cap Marti, Arenal, Montgó- Valls, Lluca, Tarraula or Adsubia “.

The mayor, José Chulvi, has stressed that this new plan “continue improving safety on the streets of Javea and of developments that for more than a decade that had not benefited from public investments.”

The asphalt plan is one of the projects under the treasury surplus of 2013, by order of the central government, can only be invested in certain actions defined as “financially sustainable”, ie, they do not generate future spending. In this group of works for example the construction of a swimming pool, or the need to improve most of the sports facilities having this town.

We are OPEN Online and by Phone for business

At CarOutlet the priority is our clients, employees and collaborators.

For this reason, and due to the current outbreak of Coronavirus (COVID-19) and State of alarm in Spain, we want to inform you that CarOutlet has business continuity plans that will ensure that our customers are attended to and served according to all health regulations and safety advice imposed by the Spanish government, we continue to take only online reservations and telephone reservations until further notice, there are some changes in the way we operate and we are more than happy to attend any questions you may have regarding vehicles, payments, deliveries on our hotline: +34 966 18 18 24 from Monday to Friday: 9:30 to 18:00.

Also tell you that we have the help of the CarOutlet team, some working from home and others working at our workshop with strict hygiene standards to maintain the quality and delivery times of vehicles purchased from us, we do however stress again that we will be operating only on a ONE to ONE basis and with the strictest hygienic standards, we understand that for some people a vehicle is an absolute necessity in some areas of Spain and we are here to serve you.

Our teams are also trained to work remotely and without interruptions to continue with the commitment we have with you.

Thank you, keep safe and stay at home unless it's esential.